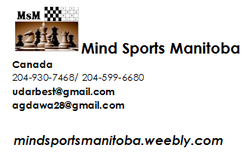 Inspired by the passion and dedication to sports by a lot of Winnipeggers, MIND SPORTS MANITOBA (MSM) was formed by Steve Udarbe and Arvin Dawa in January 2015 in Winnipeg, Manitoba to boost development in chess and scrabble and other sports activities by bringing together all sectors of society. It was the offshoot of strong community participation in the said sports in several centres and venues all around Winnipeg.
.
Initial activities of this non-profit, non-stock organization are fund-raising activities toward the mainstream plans for tournaments to be held annually in the city in the near future. School clinics given by noted chess persons are also planned across school divisions as team presenters are being organized and materials prepared. Regular weekly meetings at Sinclair Park community centre where open chess and scrabble tournaments will also be staged. See Announcements page for regular and upcoming events

MIND SPORTS MANITOBA is a community non-profit organization of Winnipeg, Manitoba moving to spark learning and development of mind sports for all ages.